NOVEMBER CONCERTS ADDED TO “HISTORY OF THE EAGLES” TOUR 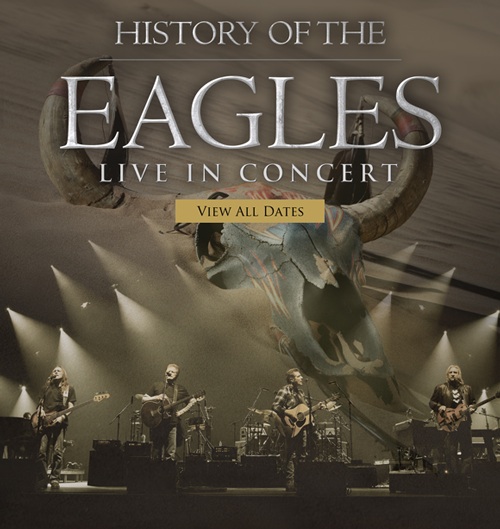 Tickets for the November Concerts On Sale Saturday, June 29 at 10 AM

The Eagles have added ten November concerts, beginning Monday, November 4 in Montreal, Quebec to the iconic band’s “History of the Eagles” tour, which kicks off on July 6 in Louisville, Kentucky. These dates are:

Tickets for the two Canadian concerts go on sale to the general public beginning Saturday, July 6 at 10 AM - the November 4 concert at Bell Centre tickets are available through Evenko.ca; the November 6 concert at Air Canada Centre tickets are available through Ticketmaster. American Express® Cardmembers can purchase advance tickets beginning Monday, July 1 at 10 AM local time through Friday, July 5 at 10 PM local time.

The Eagles – Glenn Frey, Don Henley, Joe Walsh and Timothy B. Schmit – will perform classics spanning their career, including some that have never been performed live, as well as songs featured in History of the Eagles, the band’s acclaimed documentary that provides an unprecedented and intimate look into the history of the band and the legacy of its music.

Available on DVD and Blu-ray, History of the Eagles is a meticulous creation featuring rare archival material, concert footage, and never-before seen home movies that explore the evolution and enduring popularity of one of the world’s biggest-selling and culturally significant American bands. Available through the usual retail outlets, online at Amazon.com and www.eaglesband.com, the package can be purchased through Ticketmaster when ordering concert tickets. History of the Eagles has already become the year’s best-selling music video.

The Eagles have sold more than 120 million albums worldwide, earning five #1 U.S. singles and six GRAMMY® Awards. Their Greatest Hits 1971-1975 is the best-selling album of all time, exceeding sales of 29 million units. The band’s Hotel California and Their Greatest Hits Volume 2 have sold more than 16 and 11 million albums respectively. The Eagles were inducted into the Rock & Roll Hall of Fame in 1998.